Sea salt has some health benefits, but does not lower the sodium content of foods. 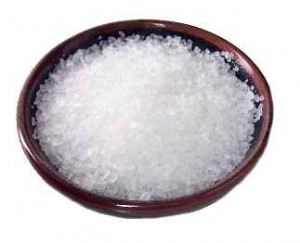 Sea salt has boomed in popularity in restaurants and supermarkets. Many gourmet chefs say they prefer it over table salt for its coarse, crunchy texture and stronger flavor. Manufacturers are using it in potato chips and other snacks because it’s “all natural,” and not processed like table salt. And some health-conscious consumers choose it because it contains minerals like magnesium.

Each of the above-mentioned characteristics may set sea salt apart from table salt, but in sodium content, there’s absolutely no difference between the two. Both sea salt and table salt contain about 40 percent sodium. Unfortunately, many consumers haven’t gotten that message. In an April 2011 survey by the American Heart Association, 61 percent of respondents said they believed sea salt is a low-sodium alternative to table salt.

It is well known that sodium increases blood pressure, which is a main risk factor for heart attack and stroke.

But What´s the difference between sea salt and table salt? sea salt is obtained directly through the evaporation of seawater. It is usually not processed, or undergoes minimal processing, and therefore retains trace levels of minerals like magnesium, potassium, calcium and other nutrients.  Table salt, on the other hand, is mined from salt deposits and then processed to give it a fine texture so it’s easier to mix and use in recipes. Processing strips table salt of any minerals it may have contained, and additives are also usually incorporated to prevent clumping or caking.

While these attributes may make sea salt more attractive from a marketing standpoint, there are no real health advantages of sea salt. The small amounts of minerals found in sea salt are easily obtained from other healthy foods and sea salt contains less iodine than table salt, so it doesn´t help to prevente goiter.

The next time you find yourself choosing between sea salt and table salt, remember that it’s probably mostly a matter of letting your tastebuds decide.  But whichever option you choose, keep in mind that both contain the same amount of sodium, and remember that the American Heart Association recommends limiting sodium intake to no more than 1,500 milligrams a day.