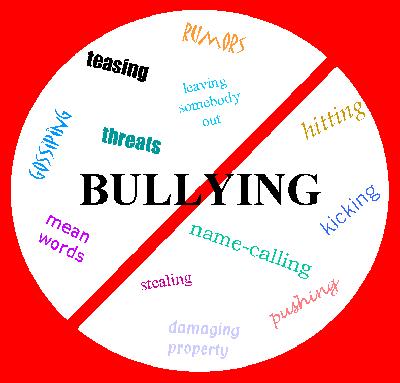 Bullying, when not detected by parents, can be a cause of suicide among kids and teenagers.

Bullying is an early form of aggressive, violent behavior. It can be physical, emotional, verbal or a combination of these three. It can be done by groups or individuals. A bully takes advantage of another individual that he or she sees as more vulnerable. Bullying can be in the form of being called names, being picked on, or being excluded. Bullying behavior harms both the victim and the bully and if left to continue, can become a habit.

Bullies are often children who have been bullied or abused themselves. They bully to feel competent, successful, to control someone else or to get some relief from their own feelings of powerlessness. Bullies are outgoing, aggressive, active and expressive. They get their way by brute force or openly harassing someone. A bully intimidates others to cover up his own insecurities and inadequacies. He may lack good adult role models. Some characteristics of a bully include wanting power over others, being concerned with own pleasure, willing to abuse people to get his way and finding it difficult to see things from someone else’s perspective.

Why do some people become victims and others do not? The victim is often singled out because of his/her psychological traits more than his/her physical traits. They are likely to be shy, sensitive, anxious, insecure, have low self-esteem and lack social skills. Physical traits that tend to be picked on are being overweight, physically small, having a disability, or belonging to another race.

Outward signs of abuse by a bully may be unexplained injuries, torn clothes, missing belongings or money, or repeated requests for more money.

Cyberbullying, instead of happening face-to-face, happens through the use of technology such as computers, cell phones and other electronic devices.  Cyberbullying peaks around the end of middle school and the beginning of high school.

Examples of cyberbullying include:

Bullying online is very different from face-to-face bullying because messages and images can be:

Research on cyberbullying has found that students involved are more likely to:

Cyberbullying can have particular affects on those who are targeted. Research has found that young people who have been cyberbullied are significantly more likely to:

In order to prevente bullying it is important to avoid being an easy target using posture, voice and eye contact. Avoid isolated places. Deflect bullies with humor or change the subject. Do not obey the bully. Run away rather than comply. Make more positive friends.